Luton In Harmony is a campaign supported by the Luton Forum aimed at drawing our communities together. We wish to strengthen the message that we will challenge violent extremist ideology, wherever it comes from, and unite the town in supporting, giving voice to, and celebrating our diversity.

We currently face many challenges to cohesion in Luton – but the town’s diversity has long been one of its greatest strengths and that remains the case today. Luton has been the focus of many negative media stories. Luton in Harmony will draw more attention to the many positive aspects of the town and its people. We have faced considerable challenges to cohesion in the past, in terms of local protests and associated tensions. Although these involved relatively small numbers of people, the impact was felt, and the image and reputation of Luton as a cohesive town was undermined. Many people across the town have been motivated to speak out against division and negativity, and some wonderfully positive events have taken place such as the Luton Council of Faiths’ Faith Walk and the Love Music Hate Racism event in St George’s Square.

These events, and others like them, are generally less widely acknowledged than the divisive actions of minorities mentioned above. Our ambitions are to improve community cohesion further – building on work that goes back a number of years.

It is clear that we require a united front to enhance our efforts to marginalise violent extremist influences from all angles. We will acknowledge all of our communities, and challenge the image that the town is fractured or ill at ease with itself.  Luton in Harmony will kindle local civic pride and confidence, and has the potential to improve the economic, environmental and social well-being of borough residents.  We want to demonstrate our vibrant and colourful past, present and future.

The arrival of MV Empire Windrush brought to the UK hundreds of Caribbean passengers who disembarked on 22 June 1948 at Tilbury Docks, Essex.’ Of the 1027 passengers listed on the ship’s records, 802 gave their last country of residence as somewhere in the Caribbean: 339 from Jamaica; 139 from Bermuda; 119 from England; 73 from Trinidad; 66 from Mexico (Polish migrants); 44 from British Guiana; 7 others Caribbean; 40 other non-Caribbean.

The official Windrush Day is  on 22nd June and is a moment for the nation to commemorate, celebrate and recognise the Windrush Generation and their descendants – including their vast contribution to the nation’s social, economic and cultural life. This year’s celebrations are particularly poignant in the context of the COVID-19 outbreak and the dedication of the NHS and our keyworkers to keep us all safe.

The MV Empire Windrush docked in 1948, the same year as the NHS was founded. British Caribbean nurses and doctors have famously been the backbone on which this national institution was built.

Please see the following link to a film produced locally, where local members of the Windrush generation were interviewed and provided an insight on their journey, their experiences living in the UK and finally settling in Luton.

Individuals can also join in with the day:

– By tuning in to watch the National Theatre’s adaptation of Andrea Levy’s groundbreaking novel Small Island – free to air for a week from 18th – 24th June through their YouTube channel.

– By sharing photos and stories on social media of themselves or their families, their journey to the UK and what they’ve brought to this nation. Sharing on social media could be accompanied by the logo and using the hashtag #WindrushDay. 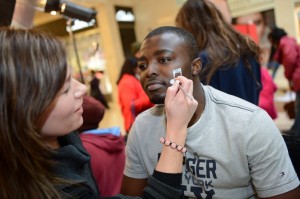 Luton in Harmony is a campaign supported by the people